I don’t get too many responses, and I don't necessarily even see them all let alone respond as I can only budget so much time to this blog.  But a recent one quipped about ‘5,000 year old dinosaurs’. as if the mere use of the phrase was some kind of killer knock down argument. So I thought I would post a bit about these iconic animals, otherwise known as dragons and celebrated in the legends of many global cultures.
Descriptions of huge dangerous reptiles, some of them aerial (like pterosaurs) and others marine (like plesiosaurs) are found in many ancient cultures from China to Scandinavia, and these stories all precede the first unearthing of dinosaur bones. Just Google on dragon legends.


Dinosaurs are mentioned in the Bible, in the book of Job. Of course they aren’t named dinosaurs, the term was only invented quite recently, but Behemoth and Leviathan are described in detail. Look up Job chapter 40 vs 15 to 41 verse 34.


There is a famous carving of a stegosaurus in a Cambodian temple. There is a very full discussion of this with photographs of the carving and the context here. 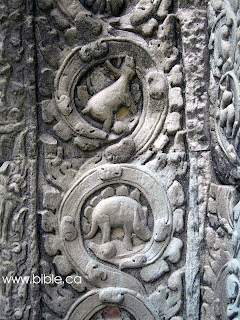 This is quite obviously a stegosaurus, it couldn't possibly be anything else. And as it certainly pre dates any discovery of stegosaurus bones AND is accompanied by very accurate carvings of many jungle animals that are still seen today strongly implies that the artist had seen a live dinosaur.


A response on Yahoo re the age of dinosaur bones can be found here.

>>>>In 1990 a sample of various dinosaur bones were sent to the University of Arizona for a “blind” Carbon-14 dating procedure. “Blind” in the sense that they didn’t tell them what the bones were. The oldest date they got was 16 thousand years. Now I don’t think they are even that old, but that’s a far cry from the millions of years evolutionists suggest. If dinosaurs became extinct more than 65 million years ago, there should be no carbon-14 left in their bones. Evolutionists of course say the samples must have been contaminated.

But there are other problems. In 1981, scientists identified unfossilized dinosaur bones which had been found in Alaska 20 years earlier. Philip J. Currie (an evolutionist) wrote about this and some similar finds, “An even more spectacular example was found on the North Shore of Alaska, where many thousands of bones lack any significant degree of permineralization. The bones look and feel like old cow bones, and the discoverers of the site did not report it for twenty years because they assumed they were bison, not dinosaur, bones.” As Dr. Margaret Helder has said, “How these bones could have remained in fresh condition for 70 million years is a perplexing question. One thing is certain: they were not preserved by cold. Everyone recognizes that the climate in these regions was much warmer during the time when the dinosaurs lived.”

In 1990, Scientists from the University of Montana found T. rex bones that were not totally fossilized and even found what appeared to be blood cells in them. Dr. Mary Schweitzer said, “It was exactly like looking at a slice of modern bone. But, of course, I couldn’t believe it. … The bones, after all, are 65 million years old. How could blood cells survive that long?” How indeed?

And then in 2005, they found an even greater discovery. Science Daily website said (March 25, 2005): “Dr. Mary Schweitzer . . . has succeeded in isolating soft tissue from the femur of a 68-million-year-old dinosaur. Not only is the tissue largely intact, it’s still transparent and pliable, and microscopic interior structures resembling blood vessels and even cells are still present.” As Dr. David Menton said, “It certainly taxes one’s imagination to believe that soft tissue and cells could remain so relatively fresh in appearance for the tens of millions of years of supposed evolutionary history.” Wouldn’t that be a hit for the meat industry if we could figure out how to preserve meat for so long?<<<

The silence of the main stream media on the Mary Schweitzer T. Rex soft tissue findings in particular is deafening. Compare it to the frequent repetitions of ‘Maybe water, therefore almost definitely life on Mars!’ hype which as I have documented here is so frequently reported on peak time BBC radio. Of course they can’t report and comment on this sort of evolutionism busting evidence.


Even Charles Darwin in Voyage of the Beagle noted fossils, albeit not dinosaurs, containing up to 7% fatty material and burning with a small yellow flame if lit.
A very old earth is a necessary but not sufficient condition for Darwinian evolution to have taken place. The finding of carbon 14 and soft tissue in dinosaur bones rules out the possibility that these bones could be as old as we are told. This blows the standard age of the earth and evolutionary time scale out of the water.

I am aware that the apparent very large distances between us and the farthest galaxies, given the current apparent speed of light, poses difficulties for a 6,000 year old earth, but nothing like as great as the difficulty posed for materialists by the origin of life and of the specific and complex information on DNA. I may address the issue of distant starlight and radio decay in another post.


There is a full discussion of dinosaurs and the Bible on the Answers in Genesis site here.
SO, the idea of '5,000 year old dinosaurs' is not so crazy at all. Nowhere near as crazy as the 'given time, dirty water and sparks turn into living cells and fish turn into people' nonsense that is compulsorily taught to all our children at state schools.

I do appreciate how shocking it is to be faced with evidence that turns your world upside down. But denial is not a great strategy. God did in fact create the cosmos, the world and living creatures (including dinosaurs) some 6,000 years ago, He did promise a Saviour by MANY prophecies which Jesus fulfilled (proving a God outside of time who knew the end from the beginning) and He is coming again to judge the living and the dead. And the offer of free pardon, adoption into God's family and eternal joy in heaven through Christ is still open to all.
In the end, Biblical creationists and evolutionists both believe impossible things, but we have a God who does impossible things with ease, as He proved by raising Jesus from the dead by the same wisdom and power He used to create all things from nothing by a word.

feel free to comment, good manners and lucidity are appreciated.

Elwin Daniels
sceptical and free thinking Christian, sick of being lied to and sneered at by people calling themselves rationalists who yet refuse to evaluate evidence for Christ and against Darwin impartially.